Get exclusive acces to free books and other products on Patreon.

Recently, I had someone message me with the following comment/question:

"Have you ever heard the ruins of ek balam? It is in the Yucatan and it has a statue of angel with wings. The city went out sometime in the postclassic time. It is pretty large and not to far from chin chin itza."

My response is notable, not because it puts this message-writer on the spot, but because of how it relates so closely to central points I make in Forever LDS Podcast 24: "Battle of the Book of Mormon Geographies". I replied:

"I hadn't heard of that particular feature. But I looked it up, and it's wise to be leery of such claims. When I first visited the site of Tulum in the 90s (near Cancun), I was shown a rock carving on a building that the guide himself interpreted as a representation of the "Father, Son, and Holy Ghost." It made perfect sense as he explained it, and for years I mentioned it to others as an important "Christian" connection in Mayan architecture. Then I got older and more experienced, and there's nothing beyond the guide's personal interpretation to back up this claim. (It's interesting that many of the guides at Tulum during this decade were actually Latter-day Saints who lived in the area, all brothers, apparently, from a single family, and not shy about offering tourists from across the globe their enthusiastic and "questionable" interpretations.

"So many of these Mayan sites simply "disappeared" at a certain phase, leaving no written records, or even stela with Mayan glyphs (writing). There could well be winged, human-like figures in the Popal Vuh or other Mesoamerican religious traditions, which means these statues probably have no particular connection to Christian iconography. In this case the winged figures depicted are commonly interpreted by modern Mayan scholars simply as Maya warriors with a supernatural "twist". The depiction may not even be supernatural. It may be an actual costume used in ceremonial practices. Not to say there isn't an "angelic" connection dating back to an era in the distant past of these peoples and tribes, but if so, since this site is post-Classic (well after Book of Mormon times) such a carving would be an example of apostatized "morphings" of true Christian imagery. Shucks, even today's Latter-day Saints well know that angels do not have wings, but that such beings are generally former inhabitants of the earth on "special" assignment. Even original European Christian artisans and painters who depicted angels with wings (back in the first centuries A.D.) likely adding wings symbolically--not because they believed such beings really possessed wings, but to create a symbolic representation to indicate that angels could fly or float and were endowed with supernatural "powers". So what might have originally been pure artistic lisense quickly became an accepted image of how angels really appeared. Now, in many Christian denominations, winged angels are standard lore.

Here's a link to the Wikipedia article on Ek-Balam. Take a look at the very bottom image on this page--and closely examine OTHER features on these "winged" carvings/statues, including war helmets, battle uniforms, etc. I pasted the image here and made it BIG so it can be studied by visitors to the foreverLDS website." 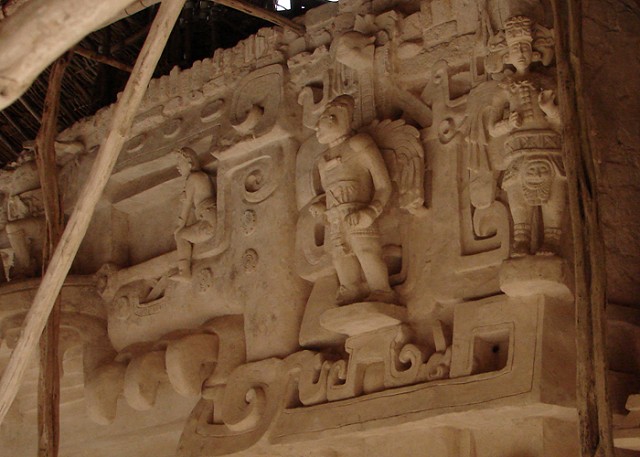 I don't want to offend the contributor who sent me this question in any way, because I've frequently been excited about things like this, and later had my eyes opened. It's very important that inquisitive minds are NOT discouraged because a particular piece evidence doesn't quite pan out as having strong Christian or Nephite connections. However, when those of us who are "armchair archaelogists" spread an unfounded rumor, potentially repeated to others only to be re-repeated, it becomes a prime example of what I'm eagerly trying to dissuade LDS layman from doing when pursuing their sincere and understandable passions for Book of Mormon archeology or geography. These are the precise points I discuss at length in Forever LDS Podcast 24.

My sincere thanks and kudos to the inquistive person who initially asked the question.

Stay Close to the Lord,